(Update: It turns out she also didn’t bother to actually write a letter to me either, see the bottom of the post.)

For a multitude of reasons, I support proportional representation (PR) systems of voting. The UK currently operates a first-past-the-post (FPTP) system of voting. This means that almost every Government in power in the UK rules without the majority of the country’s support (in fact, far from it).

The problem is most succinctly summed up in this five-minute video by CGP Grey:

I should add the caveat that this video refers to the 2015 General Election. The 2017 General Election that we’ve just had wasn’t as disproportionate as this, but that’s unlikely to be because people are any more enthused about our system of voting. For example, I voted for a different party to the one I am a member of, and I was consciously and dejectedly voting for the lesser of two evils.

Also, even though the 2017 General Election was theoretically not as unrepresentative, we are still being governed by a coalition of parties who came nowhere close to gaining the majority of the country’s support.

A cross-party campaign called Make Votes Matter, has been gathering momentum and taking action to try to get PR introduced in the House of Commons. They created a petition for a parliamentary debate on the matter, it gained over 100,000 signatures (one of which was mine), and thus reached the trigger point for a debate to be heard. This debate was scheduled for Monday 30 October 2017.

Knowing this, I duly wrote to my MP, Trudy Harrison, asking her to represent my views at the debate.

I hope that you and your family are well.

I am emailing you as I am aware that there will be a debate on Proportional Representation in Westminster Hall in Parliament at 4:30pm, next Monday. As one of your constituents, I am asking you to represent my views on the matter.

Under the current system, you are my only representative in the House of Commons. I would be very grateful if you could please attend parliamentary petition debate 168657 on 30th October and speak in favour of Proportional Representation, so that all votes count equally and seats match votes.

I heard nothing from Trudy and the subject of PR had its first full discussion in Parliament for seven years. Trudy was notable by her absence.

Then, last week, I received the following letter from Trudy herself: 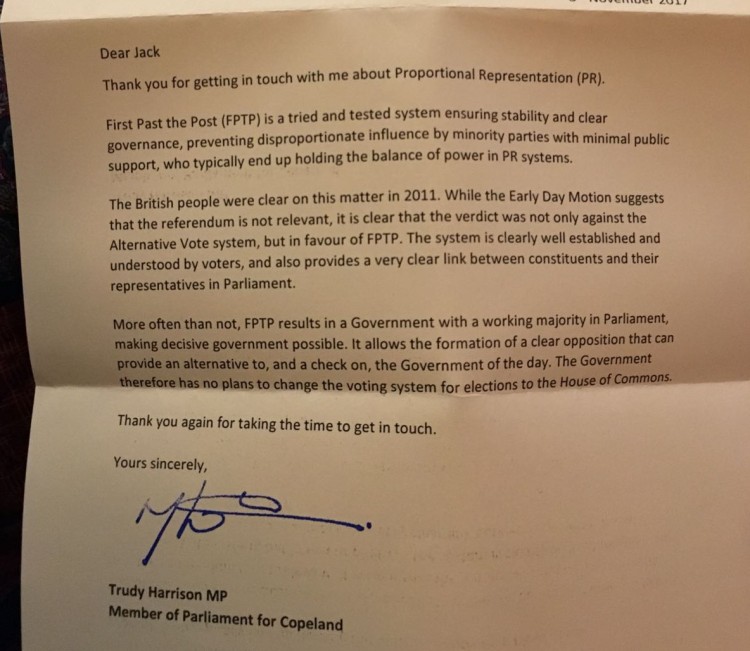 I was somewhat dismayed by this response for the following reasons:

To summarise, Trudy’s letter illustrates exactly why I think we need proportional representation. She is my only representative in Parliament, and she is therefore the only elected person with some degree of a responsibility to reply to me. Yet her response to my polite request for her to represent me in parliament is as good as, “sorry, I don’t give a shit. I can’t even be arsed to write a personalised letter, I’ll just get one of my flunkies to Google why FPTP is better than PR and fob you off with nonsense. And by the way, this letter ignoring your opinions represents why this system is good.”

Now, someone who disagrees with me might wonder what I think Trudy should have done. Of course, you might reasonably argue that I’m not very representative of her constituents and that it’s very possible that, if asked, they would support FPTP. And this is all well and good. The point is, she doesn’t have to agree with me to at least represent me. She might have attended the debate and said that while she is personally in favour of FPTP for the reasons she sets out above, numerous constituents of hers have written to her in support of PR. Given her apparent support of the “will of the people” with regard to Brexit, why do the British people not deserve a say on the voting method used to elect herself and her colleagues?

Update: Since writing this post, it turns out that Trudy didn’t write this letter at all. People across the country have received identical copies of this letter from their Conservative MPs. What a sham. There couldn’t be a better demonstration of a need for reform than this.